I really have an aunt on Nantucket. She’s not actually from Nantucket (she’s from New Jersey – it could happen to anybody) but she has lived there for twenty years. Given that we are on the east coast, and that we seriously owed her a visit, we endeavored to travel to Nantucket to see Aunt Valerie. Thus, we fled the melty humidity of New York and arrived in breezy, lovely, Nantucket. This place is so rich and famous that it makes Robin Leach feel out of place. If you sneeze, a dozen millionaires catch cold. Scions, heirs, and oligarchs swoop in on their private jets and yachts to take in the charm of the only quaint whaling village where you will find a Louis Vuitton bag at the thrift store.

With all that, it’s really very charming and it’s always fun to go to Nantucket.

Now, a word about my aunt and how I came to have an aunt on Nantucket.

My Aunt Valerie married my beloved Uncle Joel several years ago. Uncle Joel was a terrific guy. At my wedding, he stood in for my father (who died when I was eleven), and I’ve always had a particular fondness for him. He passed away from cancer three years ago, but we’ve stayed in touch with Valerie. I’m not sure exactly what to call her, though. Aunt doesn’t quite fit. We may need a ruling from the relative-naming officials, but I think maybe she’s my Aunt Emeritus. Anyway, Joel retired from his job running one of the two banks on the island at a very young 60. He traveled with his new wife, spent time working on his very cool house, and lived his life. It was cut short, but I can’t imagine that he regretted his choices for a moment. I really don’t want to become maudlin, but it’s in that spirit that we are taking this journey. You only live once, as the kids today are fond of saying, although for them that’s more or less an excuse to hook up and sniff glue.

Back to Nantucket. Apart from being the inspiration for limerick writers the world over, it is a rather fancy place where people like Jack Welsh and John Kerry and Steve Forbes all stumble over each other at the private jet terminal at Nantucket Memorial Airport, known by its call letters, ACK, which is the sound my cat makes when she’s horking up a hairball, but whatever.

It is also a place where grown men wear shorts in the inexplicably popular island color, a red that approximates a Brandywine tomato or pasta alla vodka. If you wear socks with your topsiders you will be hauled in for questioning.

The Famous Tomato Pants of Nantucket

Okay, enough joshing on the gentry. Just as there is a lockjawed landed upper crust that yacht-hops in the harbor, there is a year-round community for whom this neat little piece of real estate is actually home. My uncle (and my father) came from very rugged stock – Uncle Joel was the only one in his family to graduate from college. His father was a plumber. Aunt Emeritus Valerie is a social worker and clinical therapist. So there are real people out there, and we had the chance to meet a few this weekend.

For example, if you are in the neighborhood in Siasconset (called ‘Sconset by the locals) on the eastern edge of the island, you will likely see Tom Mulholland sitting in front of his house with a falcon named Houdini and a red-tailed Hawk named Shaka Zulu. With his long, white beard, Tom might stand out at the Angler’s Club. 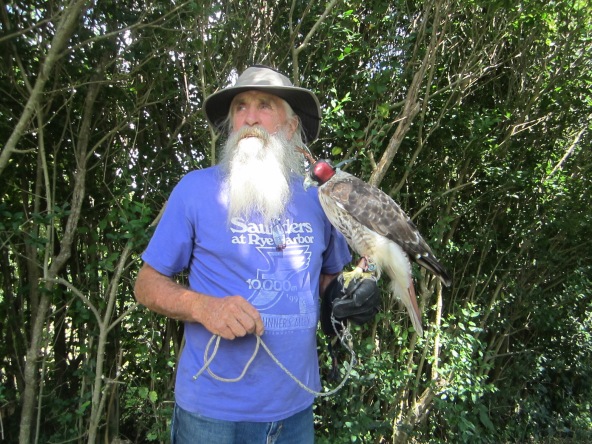 But just go up to him and ask him about his birds and you will be invited to sit down and talk about hawking and falconry, and you may just learn a bit about Tom’s views on the government (intrusive, mostly) the release of feral cats on the island (very bad – they’re wiping out the native pheasant and grouse population) and ISIS (very, very bad). If it’s hunting season (it isn’t, which is bumming Tom and his birds out at the moment) you will have the rare opportunity to see nature at its most basic. But go – Tom is generous with his time, giving lectures to schoolchildren on falconry (but not politics, which he reserves for the adults), and he’ll stop whatever he’s doing to talk to you about his birds if you are curious enough to ask. The sight of them just sitting on their perches is impressive. They are simply spectacular creatures.

We experienced another uncommon pleasure of Nantucket – free clams. Valerie has a small motorboat that she uses to tool around the harbor, and she took us to one of her favorite clam spots, which coughed up an astonishing bounty.

And this was not hard work. There was a little raking involved, but we also found tons of clams that were just lying around and we more or less picked them off the beach. 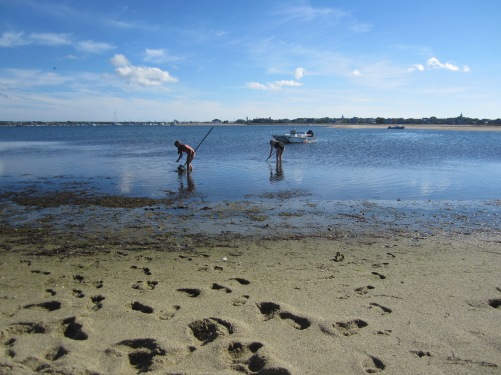 We hauled in about twenty five pounds of clams the first day and nearly forty pounds two days later. The Fresh Lobster Company of Gloucester, Massachusetts will happily ship you a pound of clams for $10.25. At that price, we raked in (har!) over $600 worth of clams. Subtract the price of the clam permit and you are still way ahead of the game. We ate clams for days and still had a bunch left over. And my good jesus they were delicious. Sweet and salty – the peanut butter and jelly of the sea.

Our haul of clams

We also took in a play at the local theater company, the White Heron Theatre. Whenever we travel, we try to see some local theater. Since there are always talented actors hanging about on the island, you’re likely to see something pretty good. We saw a new play called Small World, by Frederick Stroppel, which explored what the meeting between Walt Disney and Igor Stravinsky might have been like as they prepared to make Fantasia. It was a little Saving Mr. Banks-y, but it was well-acted and well-directed and we had an exceedingly good time. If Stroppel was first with the idea about a story about Walt Disney talking a cranky foreigner into working on a Disney picture, I bet he’s pissed. Oh well, at least he’s pissed in Nantucket.

The next time you visit Nantucket, go pay Tom Mulholland a visit. Here’s his website.

Or buy yourself a pair of tomato pants and just walk around without socks on. Nobody will notice.

3 thoughts on “There once was an aunt from Nantucket…”