We made it. It took us 22 hours from door to door, which included one Metro ride, an Amtrak trip up to Newark, two planes, and an exciting rental car journey, but we are now in our little apartment in the tiny hamlet of Forza d’Agro in Sicily.

The hour ride from the airport to this village reminded me that this journal now officially moves from its breezy, familiar boy-returns-home phase to the more standard fish-out-of-water mode. Case in point – I was unable to get cash from the ATM at the airport in Sicily because there seem to be too many numbers in my passcode. Cashless, we embarked upon our drive to Forza, but once I accepted an on-ramp ticket on the highway, I knew I’d be on the hook to pay once we got off. I took the next exit, reasoning that attempting to beat the Sicilian highway system for one exit’s worth of toll would be better than sticking them with an hour’s worth. My Italian is slightly worse than the average housecat’s but I was able to explain to the toll attendant that I didn’t have any Euros. As it turns out they take credit cards, so I sheepishly handed the nice lady my card to pay my 50 cent fare, having envisioned doing hard time for toll theft. For the next seven months, we’ll be negotiating systems that we don’t understand in languages that we don’t speak. Yay!

Our goal from the start was to find a place that was still reasonably warm and near the ocean. We were hoping for a terrace, a view, some semblance of a town, and good food. We got pretty close. 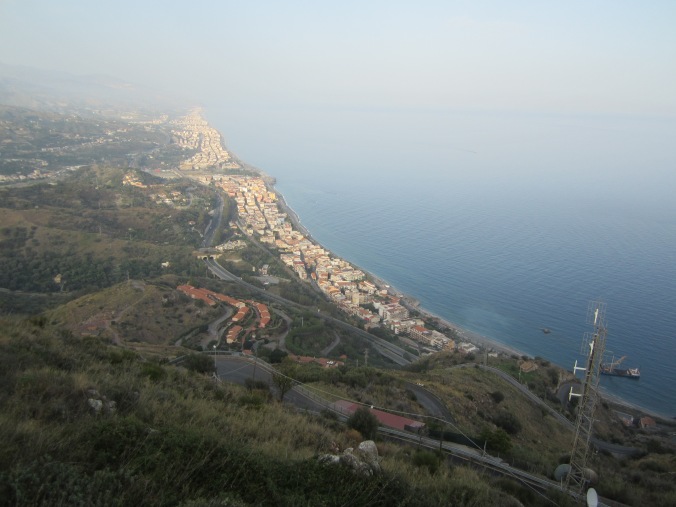 The view from our terrace. Fifty eight bucks!

Of all the towns on the planet, we landed on Forza d’Agro, a 15th century village of about nine hundred souls perched on the top of a hill overlooking the Ionian Sea.

This place looks like it was designed by a crack-addled Hollywood set decorator with an unlimited budget and too much time on his hands. Every third building has some of its stucco missing to reveal the brickwork beneath, like the ham-handed décor at the Two Guys from Italy pizzeria in Ypsilanti, Michigan (yes, that joke’s for you, Joanne).

The streets, if you can call them that, are arranged in elegant little curves like the back lot at Universal. There’s the ruin of a Norman castle and another of a Moorish palazzo. There are little bitty piazzas (piazzi?) wherever you turn, like at the Venetian Casino in Vegas, baby. It’s ridiculous, and perfect.

(I interrupt this fascinating missive to report that Janine, with whom I am not really bickering, has just emerged onto our little terrace with a glorious little plate of prosciutto, olives, cherry tomatoes, and breadsticks, which had been procured at our neighborhood markets. I started cackling with delight, which put Janine off slightly, although she understood my point, I think.)

There are at least three working churches here in Forza, which puts me to mind of an old joke. A Jewish guy washes up on a desert island. Years later he is rescued, and he insists on giving his rescuer a tour. First stop is a synagogue he built. “This is Temple Beth-El,” he says. The second stop is another synagogue. Before he can say what it’s called, the rescuer asks why the guy built two synagogues. “THAT ONE,” he exclaims with contempt, “I don’t go to.”

I’m thinking that since everyone is Catholic on this here rock they went to a lot of effort to build so many churches, but what do I know?

The people are unfailingly nice, though, as is everything else in this sleepy little burg, which is made even more somnambulant by the fact that it’s off season. Every so often a Dutch or German couple wanders through, bedecked in many colors, wearing spiffy modernistic eyewear, and issuing guttural consonants, but otherwise we more or less have the joint to ourselves.

There’s something a little Shining-y about traveling in the off season. On the one hand, the weather is shmabulous, and anyone who has been to Italy in July or August knows that you either learn to love chafing, crowds, and body odor or you suffer. On the other hand, in the off season you have to get used to the sound of your own heartbeat, and you have to not mind being the only people in the restaurant, if it’s open. I’m not sure there’s much of an in-between in many of these places. One day someone throws a switch and it’s like a neutron bomb has gone off, leaving the buildings but vaporizing the people.

Note the incredible lack of people

Generally speaking, we’re fine on all these measures. Janine and I are already having a smashing good time (although Eat, Not Bicker, Love doesn’t quite sing). This town is crazy cute and the people are cliché friendly Italians, or Sicilians, which I suspect they prefer to be called. My guess is that like Scotland and Texas, they’d probably break from the mother ship if it didn’t mean having to coin their own money and conduct foreign policy.

In any event, these Sicilians are a friendly lot. For starters, our hosts are the bomb. We’re staying at an apartment that we found through that famous social media site with which you may be familiar, and this time it’s perfect. For fifty eight bucks a night, it’s neat as a pin, it has everything we need (including wifi that’s at least as good as our apartment in San Francisco), and it has a lovely terrace with an epic view of the sea. Our hosts answer our emails with lightning speed, and yesterday came a’knocking on our door with a chef’s knife and a cutting board after we sent a very gentle request. They are cheerful and generous, and I would put them up in our spare room if they ever come to San Francisco. Hell, we’d give them our room.

I now find myself in a bit of a bind, dear reader, as I knew I would. While in New York, I spent too much time eating and doing, and not enough time writing. I promised thrilling reports about museums and restaurants and other cultural tidbits, but I failed to deliver. Now that I have some time to reflect, I could probably go back and recreate these moments, unless it seems odd. What are your thoughts?