This post comes with a parental warning. It contains food writing at its most obscene. Please put the children to bed lest they
look over your shoulder at the dirty pictures. With any luck they are too young to read.

Now sit back, pour yourself a cocktail (unless you’re at your desk, in which case you may just prefer to take a nip at your flask) and let me tell you about the mighty chivito – the national sandwich of Uruguay. (By the way, a shout out to loyal reader Phillip Shaw, whose timing was impeccable – he sent me a note about the chivito as I was in line to buy one.)

Uruguay, you say? What happened to Buenos Aires? We wanted a little time at the beach and this was the closest, cheapest way to do that. The sleepy town of Colonia, Uruguay sits across the mouth of the Rio Plato from the Argentine capitol, an hour away by ferry.

The river then empties into the South Atlantic. It’s the strangest body of water I’ve ever encountered. It’s a thirty mile wide fresh water, well, thing, that’s about ten feet deep. You could almost walk across it to Buenos Aires, which we can see way off in the distance from our twelfth floor apartment. The water is muddy brown, which might put you off, but it’s entirely pleasant to wade in from one of its quiet sandy beaches. So it’s not really the beach, but it will do in a pinch.

Colonia was so close yet so far. We got to the dock early, which was lucky, because our 1:15 ferry was cancelled and we were able to get on the 12:15, although we were then informed that it would be delayed until 1. There was a line to get onto the boat, but the poor saps who obeyed the rules were outnumbered badly by the throng that just rushed the door when the departure was announced. It was mayhem. I blame this on poor governance.

The boat made a nifty one hour trip across the water. Upon landing, we just sat there. There was much confusion about whether, when, or how we might get off the boat. About half an hour after landing, somebody made an announcement, which was met with sarcastic applause and then…nothing happened. After more waiting, people were allowed to make a mad dash for the exits. With sincerely jangled nerves, we finally made it ashore.

The town itself could be quieter but I’m not sure how. For four bucks (although thanks to the vagaries of demand pricing the ferry can cost as much as fifty, if you can believe it) you can travel from crazy BA to the town that time forgot. Colonia has many charms. You can get U.S. dollars from the ATM, and there’s one exchange rate – no blue rate to make you crazy. It’s full of history. In fact, we wandered by this store and saw a family that looked amazingly like us. Apparently we have Uruguayan relatives deep in our past.

Janine, Maggie and I were astonished at the amazing resemblance we bore to this distinguished Uruguayan family.

You can sit on a flat sandy beach, you can wander little cobblestone streets, you can have a cocktail at a cute little restaurant that has great appetizers and mystifyingly bad entrees as you watch the world’s most beautiful sunset, and you can watch people wander the streets lugging their thermoses and sipping maté through a metal straw.

This man, like so many other people in this town, is carrying his thermos of water, which he uses to refill his maté cup, which he sips at through a metal straw while walking down the street. Apparently, this drink also keeps you thin.

We even stumbled across a parade led by a man in very high heels.

Just another day in Colonia. In addition to the world’s finest national sandwich, Uruguay has progressive laws on abortion and same sex marriage to boot.

You can walk the length of Colonia in about fifteen minutes. There’s a charming little marina and the people are amazingly polite. Oh, and you can eat a chivito.

Yes, it’s the moment you’ve all been waiting for, the chivito.

This sandwich is like nothing I’ve ever seen, or eaten. Chivito means little goat, but there’s no actual goat in it. Why little goat? Who cares? The sandwich has been hardening arteries in Uruguay for seventy years or so, and you can get one on every single street in this town. What is it? What isn’t it? It’s a layer of thin sliced filet mignon with ham, melted cheese, a fried egg, lettuce, tomato, mayo, and about a dozen condiments including pickled vegetables, marinated peppers, olives, peas, carrots, and a bunch of other stuff I couldn’t identify. The whole shebang is served on a massive bun, which, if it does its job right (and it seldom does) stays together for at least two or three minutes before yielding to the pressure of its outsized contents and disintegrating into a pile of stuff in front of you.

There is another sandwich that takes the chivito to another, even more sinister, level – the Milanesa. In the Milanesa, instead of a thin slice of filet, they insert a hubcap-sized portion of breaded, fried chicken or steak that hangs over the rest of the sandwich like a diving board.

That’s right, they take all that stuff and add a piece of deep fried meat to it. Mike Bloomberg, bless him, will never set foot in Uruguay for this reason alone.

As this barely-safe-for-work photo will prove, the result is absolutely obscene.

Here it is, in all its glory, the chivito! (Actually this is a Milanesa with chivito fillings, but whatever.) 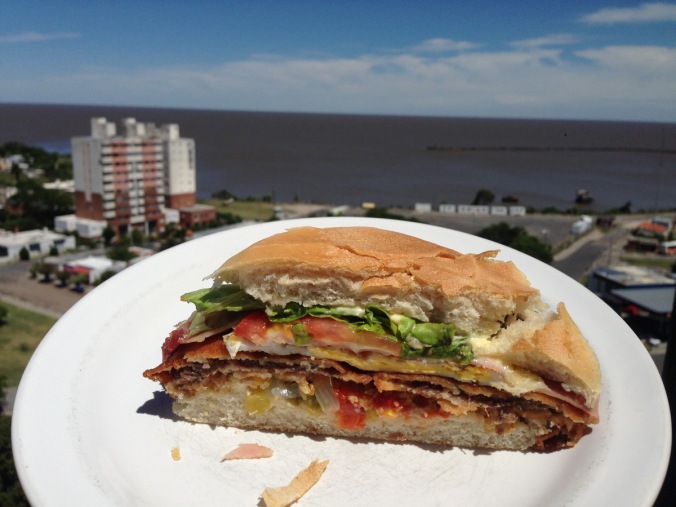 The equally obscene cutaway shot, taken from our balcony.

I had three of these in three days this week. If I stay in this town for much longer, I will have to be loaded by crane onto a barge and evacuated for my own protection. I secretly suspect my wife is contacting the producers of some intervention reality show as I type.

3 thoughts on “All hail the chivito – the national sandwich of Uruguay!”