Something came over us a few months ago, and we decided to go to Egypt. Needless to say, Egypt hasn’t exactly been a top destination for western tourists for a while. But things seem pretty good right now, and we decided to give it a whirl. Janine has been talking about wanting to see the pyramids for years and we were in the neighborhood, so we decided to stop by for a visit.

Once we decided to come to Egypt it became clear that we had to take a Nile cruise. I mean how do you go to Egypt and not go on a Nile cruise? The trip began with two nights at a hotel in the town of Luxor, after which we were to embark on our river boat. The travel agency described the place as a four and half star hotel, but it turned out to be closer to a three and five eighths star hotel. It was fine, but it had the slightly gamy air of a Graham Greene novel. They keep the lights in the lobby off during the day (to save electricity?), the wifi only works in the lobby, and there was a general sense of semi-dubiousness about the place. No matter, we were staying in a hotel in Luxor, on the mighty Nile! And it had a very nice view of the river. So there’s that.

Three and five eighths stars, but a nice view.

We were met at the airport by an interesting fellow who called himself Bob. Bob? Really? Yes, he insisted, even his wife calls him Bob. He says that people started calling him Bob when he was a teenager because of his love for Bob Marley. He wears a polo shirt with the name Bob embroidered in hieroglyphics. He’s about my age, he’s about the same height as Janine and he has a slight build, a close cropped beard, and stylish glasses.

As in Turkey and so many other relatively poor countries, you can sometimes be skeptical about people’s motives. Someone offers to help you and then asks for a tip. I really can’t blame people for trying to make a living, but it can be hard to get around without being hawked at. Sometimes the hawking is quite respectful, but other times it’s less so. In the car on the way from the airport, Bob wanted to know if we were interested in an extra tour on our free day. Why, we wondered, did they put a free day on a tour when they know very well that the guide will suggest more? My guess is that it’s because that’s just how it’s done. Bob had a bunch of suggestions, none of them cheap. But we had come all this way and figured we should try to see as much as possible. Could we just add it to our tour cost? Nope, he wasn’t able to take credit cards. I was starting to wonder how this was going to go.

We arranged for an event that night and then a full day’s excursion the following day across the river on the west bank of the Nile. Bob told us that he going to be our guide for the duration of the tour. He’d accompany us on board the boat, sail upriver with us, (We’re traveling upriver, which is south, which is confusing because the Nile flows north and most rivers flow south. Did you get all that?) and guide us around the sites along the way. Bob says that this is how it’s done here. Each group, no matter how large or small, gets its own tour guide.

I should point out that we have done zero homework about the places on our itinerary. I mean zero. Janine knows a bit about Egypt, but as far as I know, the Temple of Karnak is where Johnny Carson kept his turban. Smart people bone up on the places they’re about to visit, but we just haven’t made the time to get even the most rudimentary information about our Nile trip. This puts us at something of a disadvantage. Do we want to go to the Sound and Light show on the first night? Houseboat Dan mentioned something about it, so we figured we’d give it a try.

That night, Bob collected us at the hotel and we drove a few minutes to a cruddy parking lot ringed with souvenir stands. This was not looking so good. We waited by what appeared to be the entrance – two concrete pillars strung with a skinny chain. Finally, someone unhooked the chain, and we were led in the near-darkness down a wide walkway where we could barely make out a colonnade of what looked like some sort of sphinx-y things.

The entrance to the Karnak complex.

Just then, music blared from hidden speakers, the sphinx-y things were bathed in light, and the temples emerged under huge floodlights. I nearly wet myself. It turns out that we were at the temple complex at Karnak. Imagine thinking that you’re at a dopey light show when you’re actually at one of the greatest archeological sites on the planet.

The show was an audio dramatization of the story of the temple complex (it’s a complex because the pharaohs kept adding to it over time), complete with very old timey British narrators who sounded like actors in one of those goofy mummy movies of the thirties (with a soundtrack to match).

No matter. We were led from one part of the temple to the next and as we advanced they’d light up this part of Karnak and that, the crazy music would swell, some Edward Everett Horton-sounding dude would talk about Amenhotep or Tutankhamun, and you’d get glimpses in the dark of this extraordinary series of temples with one hundred thirty four columns, the largest of which are more than sixty feet high, which are over thirty five hundred years old. Since we were there in the dark, and they would only light small bits at a time you were left to wonder what the entire place looked like. It was an archeological peep show. Things were looking up.

I started taking a liking to Bob as well. He is full of opinions about almost everything – the travel industry, his fellow guides, politics, sociology, religion – you name it. Ask Bob a question and he’ll answer it with candor and commitment. He can read hieroglyphs like I can read a boxscore. His English is excellent, although he speaks it with what sounds like a German/Egyptian accent, and his interpretation of English grammar can have exciting results. He is unfailingly polite, especially when making anatomical observations about Egyptian art. “Look this god, he got, excuse me, two willies.” “The queen here she got skinny waist and, I’m sorry, little poops” (he meant boobs). He gargles his r’s deep in the back of his throat – “Look at this picture of grrrrrrrrrrapes and ficks” (grapes and figs). If I close my eyes, he sometimes sounds like the Yiddish rabbi played by Gene Wilder in Frisco Kid. 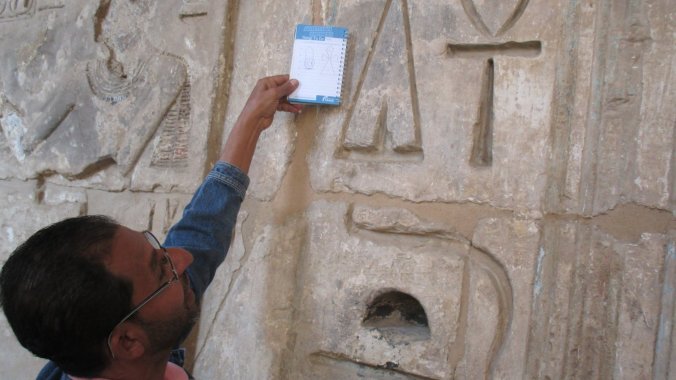 Bob, reading to us in hieroglyph

He’s perpetually cheerful and energetic and he seems to know everybody. When Janine observed this, he replied, “I know! If I’m running for mayor I’m winning.” Bob hates to wait and he makes sure somehow that we are in the front of the line, first on the trolley, first in the building, whatever. When we arrive at any visitor center, the room with the National Geographic overview narrated by Omar Sharif (I’m not kidding, almost every significant site we’ve visited has a National Geographic video narrated by Omar Sharif) magically opens and is switched on. I have watched him grease a half dozen palms.

He has also procured for us, at various times, wine, water, tonic water, and a pile of limes. At the end of each day, he appears with whatever items we expressed interest in during the day. We will get the bill, and I’m sure won’t be cheap (nothing seems to be), but it will be reasonable.

In short, Bob is the fixer’s fixer. He’s the Pope of Greenwich Village, Egyptian style.