Buddhist temples are to Bagan, Myanmar as Starbucks coffee shops are to New York – there’s one every few feet. Or so it would seem.

Bagan is a quiet little village in central Myanmar. If Yangon is the Manhattan of Myanmar, Bagan is the Poughkeepsie. At one time is was a major political center of the region that would become modern Burma. Around the 11th and 12th centuries, people starting building temples here to beat the band. They’re everywhere. 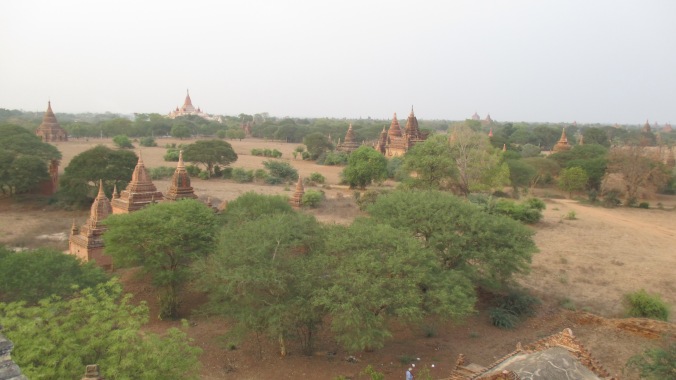 Temples as far as the eye can see. There are over two thousand in Bagan.

But my comparison with Starbucks and New York is off by a factor of about four hundred. There are said to be something like two hundred Starbucks in New York to caffeinate the city’s eight million inhabitants. Bagan has more than two thousand temples to provide solace to its two hundred thousand residents. In other words, this is the equivalent of having over EIGHTY THOUSAND Starbucks in New York. Now that’s a lot of Enya CDs and frappa macchiatochinos.

Coming to Bagan wasn’t exactly easy, but it was nevertheless necessary. We asked our friend Robert, who lives in Yangon, what one thing we shouldn’t miss when visiting Burma, and he strongly suggested that we include Bagan in our plans. The problem is that we have grown lazy, or maybe just tired. There are two ways to visit a place you’ve never heard of and have no idea what to do in. One is inexpensive and a royal pain in the patootey and one is more expensive, but pretty easy. I’ll give you no guesses about which option we went for. For one thing, it’s damn near impossible to book online air travel to Bagan. While there are no less than four little putt putt airlines that fly here from Yangon, none of them seem to have functional websites, and Orbitz or Vamaya will send people to your house to laugh at you if you try to book a flight there. Thus, if you want to buy a ticket to Bagan, you need to pick up a telephone and start calling the various airlines to compare prices and flight times, and hope that you make some headway. Hotels are a little more straightforward, but then you have to figure out what you’re going to do when you get there. Or you can just get yourself a travel agent and let them do all the dirty work. They picked us a nice hotel and arranged air travel on that famous airline, Mann Yadanarpon Airlines, for the trip to Bagan.

I have certainly flown on worse airlines, but I have to say that I have never been served a meal as off-putting as the one they served on Mann Yadanarpon. 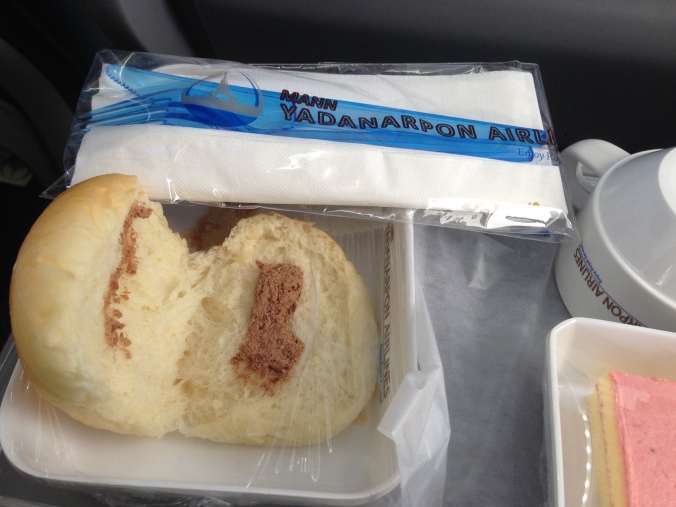 I’m an adventurous eater, but I draw the line at poop on a bun.

I was heartened to learn, however, that the airline just bought a second plane. 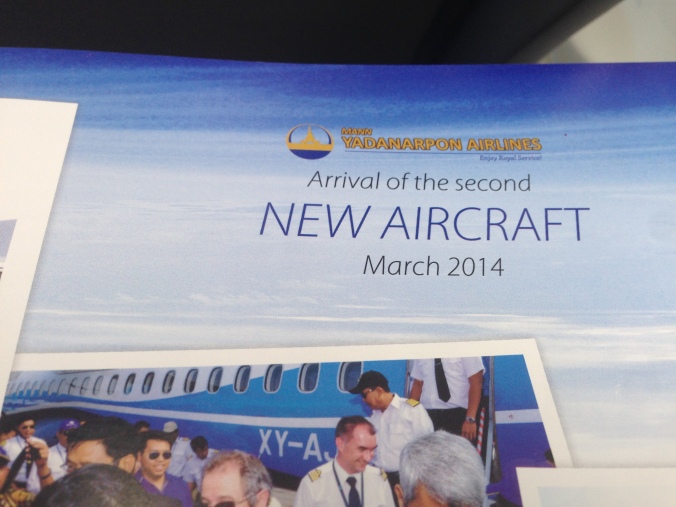 For the flight back to Yangon, we were booked on Golden Myanmar Airlines, which is Burma’s first budget airlines. Can you imagine flying on Myanmar’s version of Easyjet?

We flew up to Bagan and were met by a very nice fellow named Min Min who was to be our guide for the day. We checked into a perfectly nice hotel, which we liked despite the fact that pigeons seemed to be roosting everywhere. It gave Janine, who really doesn’t much like birds, the heebie jeebies, but we were there to see temples, and temples we saw.

We saw big temples and little temples. There were golden buddhas and marble buddhas. We scaled several steep pagodas and admired the view from on high. Min Min would walk us through the temple and give us a little background on each place and leave us to scamper around in our bare feet and take pictures. 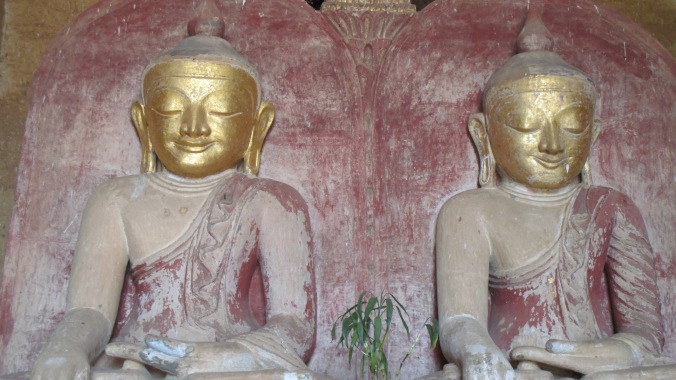 Two of the many beautiful Buddhas in Bagan.

Some people don’t like having guides show them around, but I don’t mind. We’ve been making so many decisions these days that it’s kind of nice to just put things in the hands of a local. It’s also nice to get local intelligence. 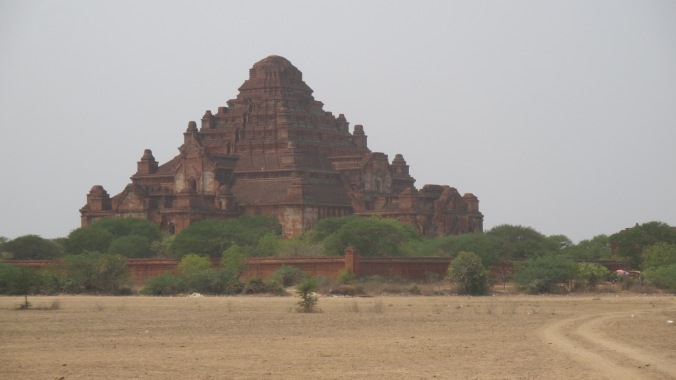 Min Min mentioned that the following day, in which we’d be left entirely to our own devices, there would be a monk initiation ceremony parade nearby. A few boys would be initiated into a nearby monastery, where they would have their heads shaved, put on robes, and learn about Buddhism for a week or so before resuming life at home. Min Min said that it was like monk summer camp. We might think of it as a Buddhist Bar Mitzvah. And so the next day, off we went. We rented electric assist bicycles and made the 10 km trip to what is known as “New Bagan” (people used to live above an archeological treasure trove in “Old Bagan” but in 1990 the government forced residents to move to the new village a few kilometers away). It was quite a thing. The boys were conveyed through town atop a pair of elephants (Min Min said that they cost $1500 a day each to rent), and there were musicians, lots of kids and adults in their best dress, and a real sense of excitement and spectacle. You don’t see something like this every day. 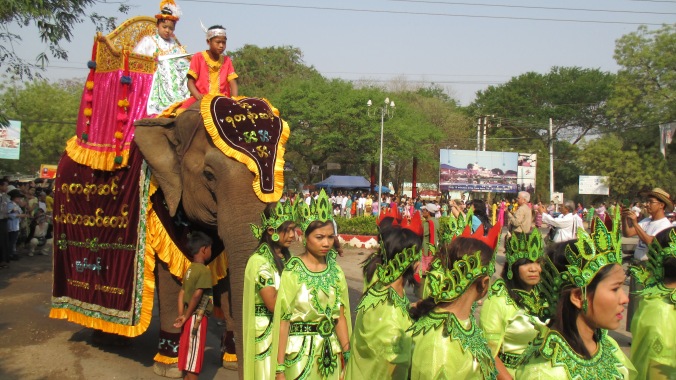 A little boy and an elephant. They cost $1500 a day to rent. The elephants, not the little boys.

Getting to Bagan was a royal pain in the ass, but it’s a still-unspoiled part of a still-unspoiled country. It’s clean, quiet, and there was almost no traffic. It was hotter than blue Hades, as my mother likes to say, but it was a stunning change of pace from the chaos and grunge of the city. All it takes is a couple of plane rides from just about anywhere in the world to stand among a few thousand Buddhist temples and imagine what life was like a thousand years ago. The world is indeed flat.