Queenstown, New Zealand calls itself the “adrenaline capital of the world,” and that may be so. After all, when you sit in a whitewater raft with a group of people who may just get you killed, it gets the heart beating.

We decided to make for Queenstown and get out and about. We had spent a lot of time on our keisters rolling past all the nice scenery, but we had spent very little time actually standing in that scenery. True, we did hike a glacier, but that was just the price we had to pay to ride in a helicopter. And so for our first stop in Queenstown we decided to go for a luge ride! Well, it wasn’t an actual luge, which is a sled that flies down the mountain on a sheet of ice at seventy or eighty miles an hour. This was a little plastic gizmo on rubber wheels that slithers down a small section of paved (and bumpered) mountain track, but it was a start. Okay, and little kids and senior citizens are also allowed to ride, so maybe we weren’t exactly pushing the adrenaline envelope, so to speak. 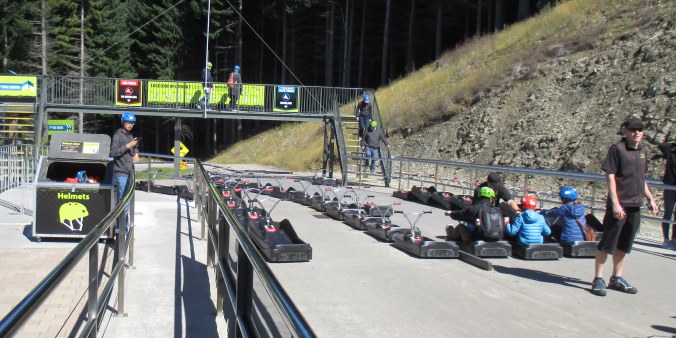 Do you feel the fear?

To get to the “luge,” we took a lovely mountain gondola that deposited us high up above Queenstown (a condition that would soon factor into our story), where we watched actual crazy people bungy jump from high platforms and paraglide down to the valley below.

We were sparing our hearts for later in the day, when we would raft down the Shotover River, which boasts Grade 3-5 rapids. We had almost an hour before we needed to be at the rafting shop, so it made lots of sense to walk past the nice comfortable gondola ride down and opt instead for the hiking trail to the bottom of the mountain, right? I’ve made a lot of dumbass suggestions over the years, and this one qualifies. Somehow it hadn’t occurred to me that the reason people paraglide from the tops of mountains is because they are high and steep.

If you look waaaay up to the top of the mountain, you can see where we started our descent. Oops.

After about ten or fifteen minutes of hiking, slipping, and sliding down the mountain, it occurred to me that we weren’t making a whole lot of progress, and our knees and quads were starting to complain. Every so often someone would pass us as they were making their way up the mountain and we’d inquire as to how much further we had to go and they would make a noise and maybe roll their eyes. We had no choice but to pick up the pace. At one point my feet went completely out from under me and I landed flat on my back. Janine took a slightly gentler tumble as well. The clock was ticking and we were in danger of missing our rafting trip because Knucklehead Jones thought it would be a good idea to go for a walk. After almost an hour and more than fifteen hundred vertical feet down a slippery, rocky cliffside later, we stumbled into the kayak place, lucky to have made it in time and not have lost our lives in the process. Adrenaline indeed.

The bus ride to the place where we launched the rafts was exciting enough. The last several kilometers to the river occurs over a one lane cliffside dirt road, which would have been fine if we hadn’t encountered a family of tourists coming in the other direction in an SUV. Neither of us could back up far enough to find a safe place to pass, so we tried to make the best of it. The SUV mushed into the hill on one side and we hugged the cliff on the other, but the physics were against us. The SUV started scraping against the bus, busting a taillight in the process. The bus was on the verge of inscribing its name in the SUV’s side when our driver had us all jump out of the bus and push ourselves against it, giving the SUV just enough room to slither away.

Oh, but the story gets better, my friends, as I hinted to earlier. Finally, after being outfitted in wetsuits, booties, jackets, helmets, and life jackets, the float leader broke the big group up into eight-person rafts. Imagine Janine’s and my delight when we were paired with five other people who spoke almost no English. I knew this because our river guide, Nick, turned to one of the guys and asked, “What’s your name?” and the guy looked at Nick and shrugged. The thing about white water rafting is that coordination and communication are essential. You know how they don’t let people sit in the exit row if they can’t understand the directions of the cabin crew? Well, a white water raft is one big floating rubber exit row.

Before the float, with hope in our hearts. In the background is one of the many very laid back raft guides.

Nick would sit at the back of the raft and issue a complicated instruction like “paddle forward!” and our five raftmates would stare at each other. One might dip a paddle into the water making a half-hearted attempt to comply, but they really just had no idea what to do. Now was the time for Janine and me to put our kayaking debacle behind us and step up to the plate. Nick had placed us in the front of the raft in the fruitless hope that maybe the rest of the group might get the hint and copy us. More important, though, Janine and I needed to be in sync so we could at least attempt to navigate some of the rapids. It was asking a lot. Like Rocky or the Bad News Bears or the Jamaican bobsled team (okay, not them), I’m happy to report that when the chips were down, we stepped up. The Harvard crew team would have been proud. The trip was not without its moments, though – in one tricky segment of the river, called the Toilet Bowl, our five friends all stopped paddling, the raft tipped all the way onto one side, and Janine went right into the water. One of the other raft leaders mentioned that the raft was about to capsize, but was righted when Janine went over the edge. Thus, she took one for the team, for which we should all be grateful. I will tip my helmet to one of my raftmates, who yanked Janine out of the water almost as fast as she went in, preventing her from drowning in a toilet bowl.

We debriefed on the whole experience at a local burger joint with a really fun couple from San Francisco that we met on the bus to the river. As it turns out they live about five blocks away from us in the Mission. It makes me feel ancient to say this, but Dave and Kaitlin remind me of us when we were…cough…cough…young. We’re young at heart, though. Like a couple in a Cialis commercial, in one day we screamed down the mountain on a luge (okay, maybe not), power-hiked a rutty trail, shot the rapids almost single-handedly, and lived to tell the tale.